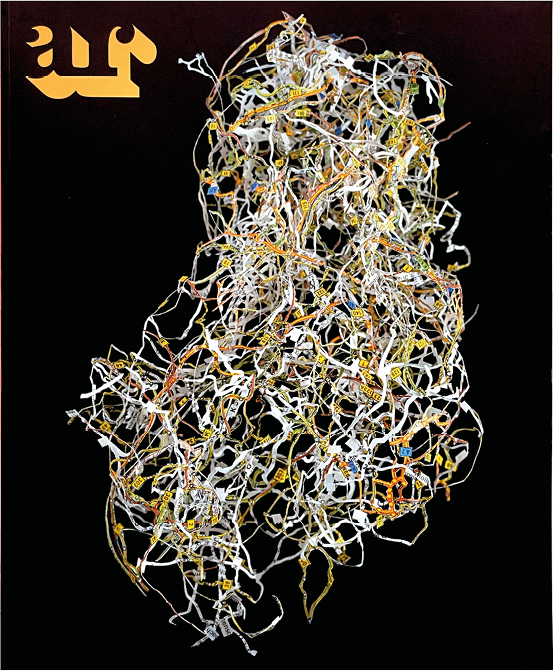 “And the earth was without form, and void; and darkness was upon the face of the deep. And God said, Let there be light: and there was light. And God saw the light, and it was good.”

That, of course, was before electricity. Le Corbusier, that other God, made the observation that “architecture is the masterly, correct and magnificent play of masses brought together in light”. Light was necessary to bring form to the void, but in Le Corbusier’s version, it plays something of a supporting role. At Light show this was reversed. Light show, curated by Cliff Lauson, focused on artificial, electric light, for which the fortified and introspective Hayward Gallery was well suited, like a brutalist Plato’s cave. The architecture becomes a mere backdrop, but a necessary medium to make the subject of the show tangible.

Light uniquely occupies the territories of art, science and religion simultaneously, and very directly. Photoreceptors, the rods and cones of the eyes, convert visible electromagnetic radiation – light – into signals that stimulate biological processes. The optic nerve is the most direct link to the brain, without opening the skull. The visible becomes physiological.

It must be this sensorial experience that made the show so popular, and led to the almost hysterical, physical ecstasy of visiting children who writhed on the the floors of Chromosaturation (2010) in the pure pleasure of the hyper-activity of their nueral firing. Carlos Cruz-Diez, an innovator of kinetic- and op-art in Venezuala in the 1950s, saturated three adjoining rooms with pure colour, red, blue and green. As the human retina is unaccustomed to experiencing pure monochrome; the effect is disorientation which is heightened when moving from one intense space to another. Adults, subdued by social constraint, surrendered more discreetly to their brains being tickled.

Anthony McCall’s ‘solid light’ piece, You and I, Horizontal, 2005 has an equally spectacular effect. Here, geometry is made apparently solid and inhabitable in a space filled with ambient smoke or mist. In it, a simple, projected ray slowly unfurls to become a hollow cone. Any obstacle to the single-point light source creates gigantic shadows on the heroic scale of a major science fiction film. If light is the first thing perceived at birth, and apparently the last thing experienced at death, this is what it might look like. McCall first produced his solid light pieces in the 1970’s. There was a hiatus when cigarette smoking was banned in art galleries, and a happy return after the 1990’s invention of the ‘haze machine’.

Katie Paterson is intrigued by the astronomical sources of light; the stars, the sun and the moon. She makes poignant pieces that reflect on time, scale and the unfathomable darkness of deep space. Her conceptual piece ‘For All the Dead Stars’, 2009, involved a collaboration with astronomers around the world to map a celestial picture no longer visible. Her piece in this show was the melancholy ‘Lightbulb to Simulate Moonlight’, 2008. A single bulb, whose cool light was precisely designed to match the spectral range of moonlight in colour, temperature and intensity, hung near the floor in an otherwise empty space. One yearned for the silly but uplifting artificiality of, ‘It’s Only a Paper Moon’ as an antidote to so much poignancy. Outside the space, a perfunctory rack contained the correct number of these special, chilly blue lightbulbs to simulate enough moonlight to last the average lifetime of 66 years. There weren’t very many.

James Turrell, predictably, had a piece in the show, and it seemed that the space outside it was designed to accommodate a queue. Those waiting could contemplate Bill Culbert’s Bulb Box Reflection II, 1975, an elegant visual conundrum where an unlit bulb is apparently reflected alight through the use of two way mirror, or Jim Campbell’s Exploded View (Commuters), 2011, a 3D matrix of LED ‘pixels’ that created a flickering sense of movement through the simple binary switch between light being on or off. Depending on the viewing angle, images are either clear and discernible, or they completely dissolve. A perfect curatorial strategy for visitors shuffling slowly towards Turrell’s Wedgework V, 1974. Feeling one’s way through the black tunnel into the art space allowed a little time for the eyes to adjust, and for the ethereal coloured light to materialise out of the gloom into an apparently solid and tangible form. Turrell articulates what several of the artists in this show achieve, whether intentionally or not: “I want you to sense yourself sensing.”

Turrell’s undergraduate work with experimental psychologist Dr Ed Wortz on the problems of perception for astronauts on the moon led them to produce ‘ganzfelds’, 360 degree, uninterrupted monochromatic visual fields, with no graspable perspectives. The effect of this sensory deprivation is that of a James Turell sculpture; a space of apparently infinite light that develops a foggy, corporeal presence. Some of these effects are also present in Doug Wheeler’s pioneering work in light and sound from the ‘60’s, but where Turrell adds substance through the ‘ganzfeld’ effect, Wheeler uses light and phosphorescent paint applied directly to architectural space to dematerialise.

Chilean artist Ivan Navarro explores ideas of authority and control through a sinister minimalist cell of two way mirror that is simultaneously an object for surveillance and an infinite prison cell.

Jenny Holzer uses LEDs to broadcast language in order to ‘have people watch what they otherwise might not’. The technique was powerfully effective in ‘Monument’ 2008 where stacked, multi-layered texts of declassified US documents from the ‘war on terror’ circle swiftly from right to left, disappearing as if behind a massive column, like thoughts crossing the mind. The content is disturbing, and the speed makes it impossibe to take everything in, which itself causes a restless and relentless anxiety.

The health and safety warning that Olaffur Elliasson’s piece could cause epileptic fits demonstrates one real potential effect of light on the body. In an otherwise dark room, a row of simple, almost comical, water fountains are momentarily frozen by strobe light to form his ‘Model for a Timeless Garden’ 2011; the water is ‘de-animated’ into snapshots by the staccato light source.

Cerith Wyn Evan’s S=U=P=E=R=S=T=R=U=C=T=U=R=E, (Trace me back to some shallow, chill, underlying motove’s overspill…’), 2010, is a series of columns of halogen tubes that pulse in a rhythm almost like breathing. They radiate heat while illuminated, and become fragile, cool and transparent when dimmed. This ghostly piece is based on a James Merrill poem of messages dictated during an Ouija séance.

Light Show was a dazzling survey of artificial light works since the 1960’s, delicately balanced between the highly conceptual and the sensory or ‘perceptual’. The catalogue contains very thoughtful essays about the work, and light in general by curator Cliff Lauson, art historian Anne Wagner and science writer Philip Ball. Slits in its thick, cardboard cover allow light through, recalling Nancy Holt’s ‘Holes of Light’ 1973. They turn the book, like the show itself, into a projector or optical toy.

In other words, I saw the light. It was good. FIAT LUX