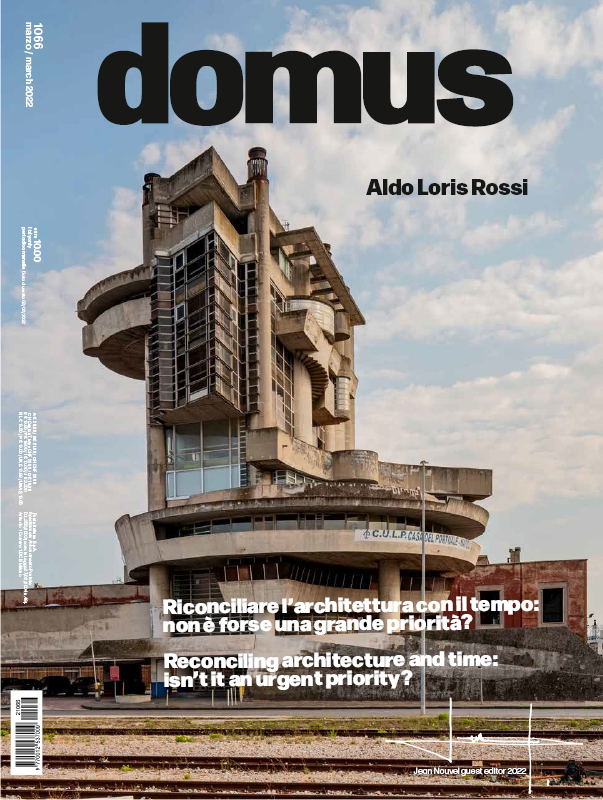 “Being unused for decades, the Silo provides possibilities, unique challenges and great potentials in reuse as well as in architectural and structural innovations. Rehabilitation of the landmark building will hail a new period, not only in the neighbouring Toppila area but also in the City of Oulu.

The Alvar Aalto Foundation looks forward to the rise of the Phoenix!”

City of the Tar Bourgeois

The AaltoSiilo, Alvar and Aino Aalto’s first industrial building, was constructed in 1931 at the limits of engineering tolerance. It rises 28-metres high, springing from a narrow rectangular base divided into three bays, each 10 x 10 metres in plan. The walls and roof are cast-in-situ concrete of an almost impossible thinness – only 10 cm – held rigid by fins that punctuate the façade. The roof barely tapers off the vertical, with a parallel conveyor chute that carried wood chips to the top for distribution through steel funnels, suspended from concrete ring beams by flexible steel joints. Bitumen painted directly onto the concrete surface served as weatherproofing. It has the austere dignity of a secular cathedral, but one elongated and exaggerated, as if imagined by an expressionist filmmaker.

The Silo is currently the focus of a significant transformation. It sits at the northernmost edge of the Gulf of Bothnia in Toppila, a neglected suburb of Oulu, where urgently needed urban regeneration is connected to the alarming consequences of climate change. Refugees (including people from Syria and Somalia) are arriving as the arctic ice melts. Post-glacial rebound results in the land ‘bouncing back’ leading Oulu to rise by more than one centimeter a year. This affects not only the relationship between land and sea, but the composition of the sea itself. The melting ice is turning the Gulf of Bothnia into freshwater: its new population of pike and perch are clear evidence of this.

Oulu’s complex history began in the 17th century, when its ‘Tar Bourgeois’ grew rich by supplying the treacle-black pine tar, extracted by burning trees, that was used for waterproofing the ships sent out to conquer what became the British Empire. The Silo was built when exploitation seemed natural, natural resources seemed infinite, and responsibility lay in satisfying human desire rather than preserving its environment. The Toppila factory complex, of which the Silo is one of the remaining structures, produced sulphite cellulose and wood pulp for the English paper producer Peter Dixon & Son Limited. It closed in 1985 as the newspaper industry’s economic fortunes changed, leaving behind a ravaged landscape where once luxuriant, virgin spruce forests grew. Now commercial sharks are once again circling, eyeing the natural resources being unlocked by the rapidly melting permafrost.

Fortunately, positive change is in the air and possible in Finland. Tech- and gaming-related startups thrived in Oulu with the growth of Nokia and now have their own identities. Research into sustainable building materials is ongoing in Oulu University and OAMK (Oulu University of Applied Sciences). With the rise of mobile telephones cellulose is being used once again for communication, but in nano-structured form in 5G technologies. There is a rising awareness of the urgent need for a new approach to the global role of this overlooked locality. The world is now being forced to confront its deepest prejudices as national boundaries, identity, consumption, materiality, preservation and sharing are all being renegotiated. There is global rethinking about what is valuable and even the nature of value itself. The regeneration of the AaltoSiilo and its re-use is a project being developed by Factum Foundation and Skene Catling de la Peña (https://aaltosiilo.com/en/Who_we_are, https://aaltosiilo.com/en/SCDLP). The Silo is on the frontline of change and Oulu is rising. Both literally and metaphorically.

Walter Gropius first published pictures of silos in the Jahrbuch des Deutschen Werkbundes[1], (the Yearbook of the German Association of Craftsmen), in 1913. The impact on the European Avant Garde was instant and electric. Le Corbusier saluted silos in 1924 as the ‘magnificent FIRST FRUITS of the new age’ in Vers une Architecture[2], (originally titled ‘Architecture or Revolution’), and Bruno Taut published the monumental Central Elevator of Buffalo, New York, in Modern Architecture, 1929[3]. But these reactions, and the modernist manifestos they inspired, were based purely on photographs. Only Erich Mendelsohn travelled to study and record the silos first-hand.[4]

Beyond their impact on architecture, the American grain silos ushered in a new form of capitalism. Once they were able to store vast quantities of grain, merchants could create a commodities and futures market they could manipulate, where traders benefit, and farmers lose out. The silo as a silent, sculptural form, embedded in cacophonous industry and compulsive activity, offered a violent rupture with the past. One can imagine a fascination with the muscular power, frenetic energy and mechanical inhumanity of these places growing against a background of the machinations that led to the first World War. Aalto’s Silo was built as Hitler was coming to power and Europe was fragmenting.

Rayner Banham taught at SUNY in Buffalo from 1976 to 1980 where he researched A Concrete Atlantis.[5] He sees the silos as the antecedents to modernism. Banham describes the frisson he felt exploring the derelict silo buildings, their ‘abandonment and isolation’ like ‘Roman ruins, enhanced by the flight of a bird of prey from the head-house at the sound of my approach’. He was transfixed by the Sphinx-like blankness of ‘this huge, rippled cliff of concrete… because it consists almost entirely of closed storage volumes to which there is no casual access, it remains impermeable, secret and aloof…as inaccessible as the interior of an Egyptian pyramid.’

Aalto was christened the ‘Sibelius of Architecture’ and the ‘Magus of the North’ by Sigfried Giedion in his influential Space, Time and Architecture, where he observed that ‘the Finns treat Aalto as a living god’. Aalto first appeared in the second edition of the book, published in 1949, where he was given more space than any other modernist architect. The Aaltos’ first industrial project shares the same mysterious aloofness that seduced Banham in Buffalo and it was immediately celebrated; Moholy-Nagy visited in 1931 to take photographs and a large feature appeared in Arkkitehti Magazine that year with most attention focused on this unusual, iconic structure.

The revival of the Silo has been conceived of in three core parts: the RESTORATION of the AaltoSiilo, the CONSTRUCTION of a new Research Centre and their CONTENT. The restorationwill treat the building as a sculpture, with minimal alteration and intervention. Stripped back to its shell and designed to minimise the impact of building regulations while creating an ideal environment for transformation into a multi-sensory, multi-media ‘Cabinet of Curiosity’ and performance space – a ‘Silo of Ideas’ – informing the research and experimentation in the adjoining new Research Laboratory.

The Research Laboratory is a courtyard structure that will occupy the space of the demolished building where trees were once turned into wood chips. It is designed around a negative ghost of the silo footprint. Visitors will be drawn in and reoriented to face the silo which can be either the focus, a screen or a background to events and performance. The new structure will be built from 20th century ‘demolition spolia’[6] and the façade will become a record of the material investigations behind its construction, an echo of Aalto’s Muuratsalo or Experimental House. We are working closely with the Oulu planning department and Toppila based cultural activists to rethink the site but also to extend its impact beyond the site to the large parking area in front of the silo, once part of the cellulose factory.

The AaltoSiilo has the potential to address the urgent realities of the Anthropocene and current concerns about the future of architecture. Ephemeral structures of steel and glass using vast quantities of concrete are constructed and torn down every day, contributing to the existential crisis we are all facing. What is the role of the architect today? How can industrial architectural heritage be preserved and reused? Is the legacy of the impact of industry on the environment in the Arctic North insurmountable? How should buildings and nature be used, engaged with, enjoyed, sustained and preserved? Can changes in current architectural practice tackle some of the destructive industrial residue of the 20th century?

These industrial sites once generated and defined communities; physically, socially and economically. Abandoned, they are melancholy remnants of 20th century capitalism and architectural utopianism. It is time to rethink these spaces for a post-industrial era and to use them to examine every aspect of the way we currently live. The AaltoSiilo rethinks materiality for the 21st century and the role industrial heritage plays in memory, in shaping place and cultural identity. Oulu is the European City of Culture in 2026, this provides a target date for the completion of the New AaltoSiilo and Research Centre.

Factum Foundation commissioned Tarek Waly to restore Hassan Fathy’s mudbrick masterpiece Stoppelaere in Luxor. This is now the home of the Theban Necropolis Preservation Initiative[7] that has already carried out the high-resolution recording of the tombs of Seti I and Tutankhamun. Now is the time for new ‘silo dreams’, the re-thinking of Concrete and soft matter (see link to Kapoor book). It is time for change…. Massive change!!! Let’s redesign everything with optimism; from how COP works to how we negotiate our shared future. This year is the anniversary of the discovery of Tutankhamun’s tomb. In 2031 the Silo will be 100 years old. We have to act for the long term. Pharaonic culture, through its relationship to their environment, was able to project itself 3,000 years into the future. Can we?

[4] ‘Mountainous silos, incredibly space-conscious, but creating space. A random confusion amidst the chaos of loading and unloading… of railways and bridges, crane monsters with live gestures, hordes of silo cells in concrete, stone and glazed brick. Then suddenly a silo with… closed horizontal fronts against stupendous verticals of fifty to a hundred cylinders, and all this in the sharp evening light… Everything else so far now seemed to have been shaped interim to my silo dreams.’ Mendelsohn, in a letter to his wife on seeing the concrete grain silos of Buffalo, New York, 1924. Letters of an Architect, Eric Mendelsohn, Abelard-Schuman, 1967

[6] The demolition of a transport hub and school to make way for the Finnish Housing Fair in 2025.

[7] See the work that Factum Foundation has carried out in Luxor: https://www.factumfoundation.org/ind/46/the-theban-necropolis-preservation-initiative